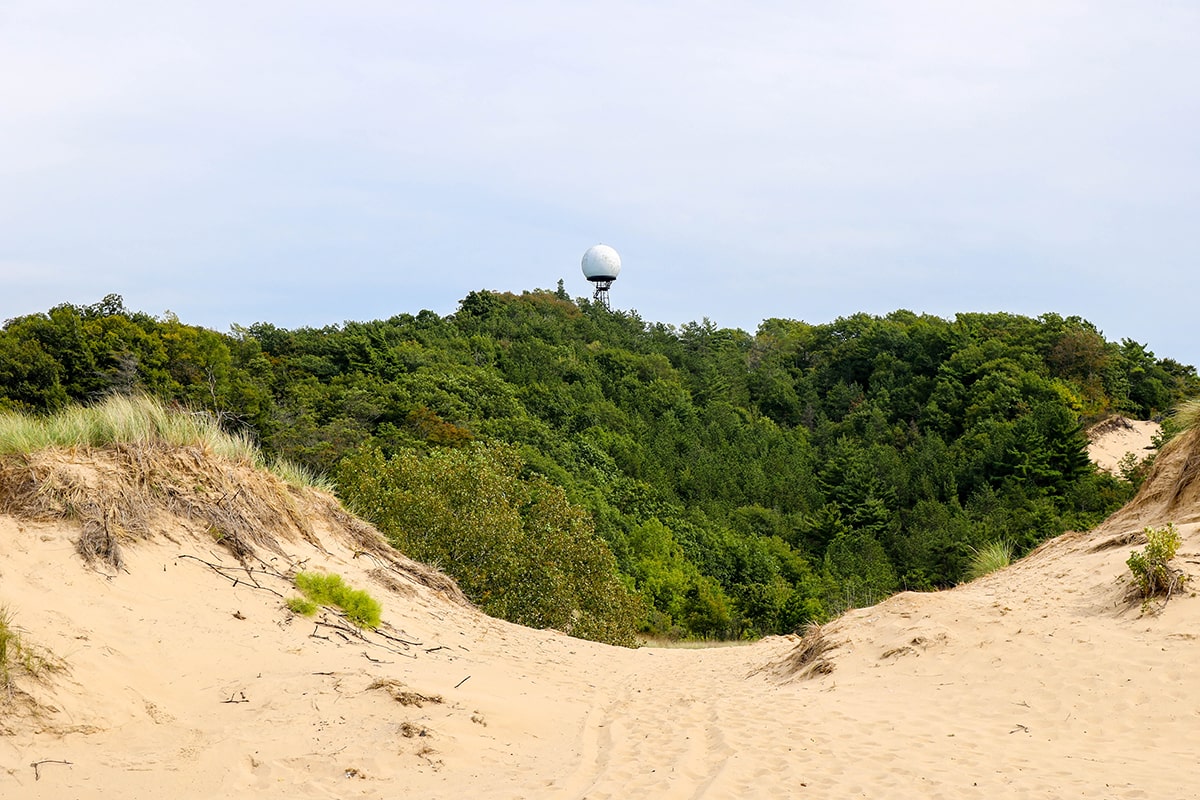 One of the most iconic sights along the Saugatuck shore is the moonlike sphere of the Mount Baldhead radar tower. This Cold War relic dates back to the 1950s, when the escalating arms race between the U.S. and the Soviet Union had many Americans living in fear of an atomic bomb attack.

In 1949, the US Air Force teamed up with IBM and MIT to create the Semi-Automatic Ground Environment (SAGE) system, a sophisticated computerized air defense network to watch over our northern border. This system collected data from hundreds of radar monitors across the country,  feeding it into one of the first true computer networks to keep an eye out for Soviet invaders. At the first sign of invasion, SAGE commanders would scramble fighter jets to intercept the threat.

However, because terrain obstructed radar signals along many parts of the border, additional “gap filler” radar towers were needed to create a complete view of low-flying aircraft. When the Air Force asked to lease 0.34 acres on the top of Mount Baldhead for this purpose, the Village of Saugatuck agreed—in exchange for the Air Force rebuilding the worn wooden steps to the top and planting vegetation to stabilize the dune. 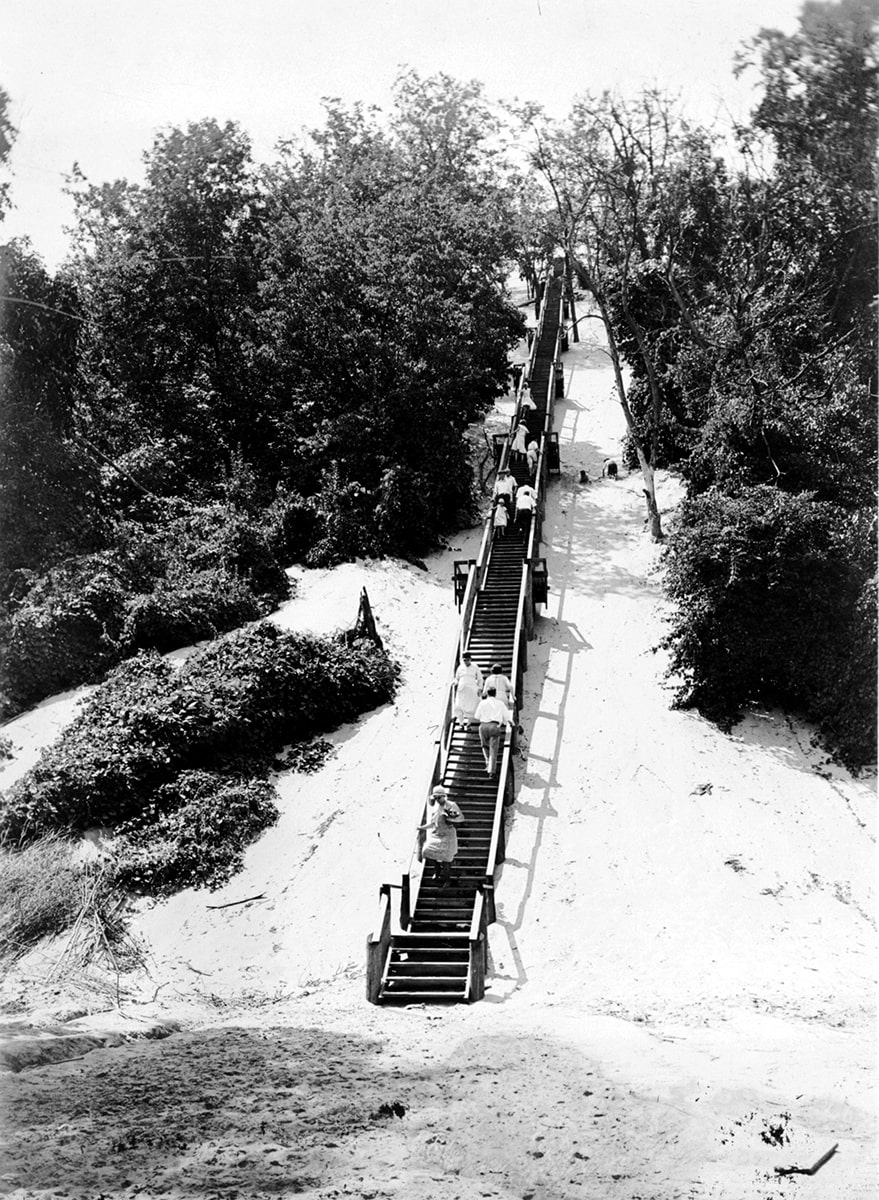 Construction on the unmanned station began in 1956. Once complete, it featured a Bendix AN/ FPS-14 radar tower, supported by two diesel power generators, two motor/generator rotary regulators, a site monitor, and a data transmitter. The original antenna began sending radar data to the 781st Aircraft Control and Warning Squadron in Battle Creek in 1958.

By 1963, technology had taken another leap ahead, so the AN/FPS-14 radar and antenna was deactivated, removed, and replaced with an AN/FPS-18 radar and antenna, protected by the fiberglass dome you see today. However, its role was short-lived. As microprocessors led to faster, more sophisticated monitoring and communication, the SAGE system was eventually phased out.

When the Mount Baldhead radar was permanently deactivated in 1968, the Air Force terminated its lease, selling the building, tower, and radar equipment to the Village of Saugatuck for $250. While no longer operational, the site is still intact, and efforts are underway to add it to Michigan’s Register of Historic Places. And you can see a little piece of history up close, for the price of a little sweat equity. (See below.)

*Thanks to the Saugatuck-Douglas History Center for sharing background information. 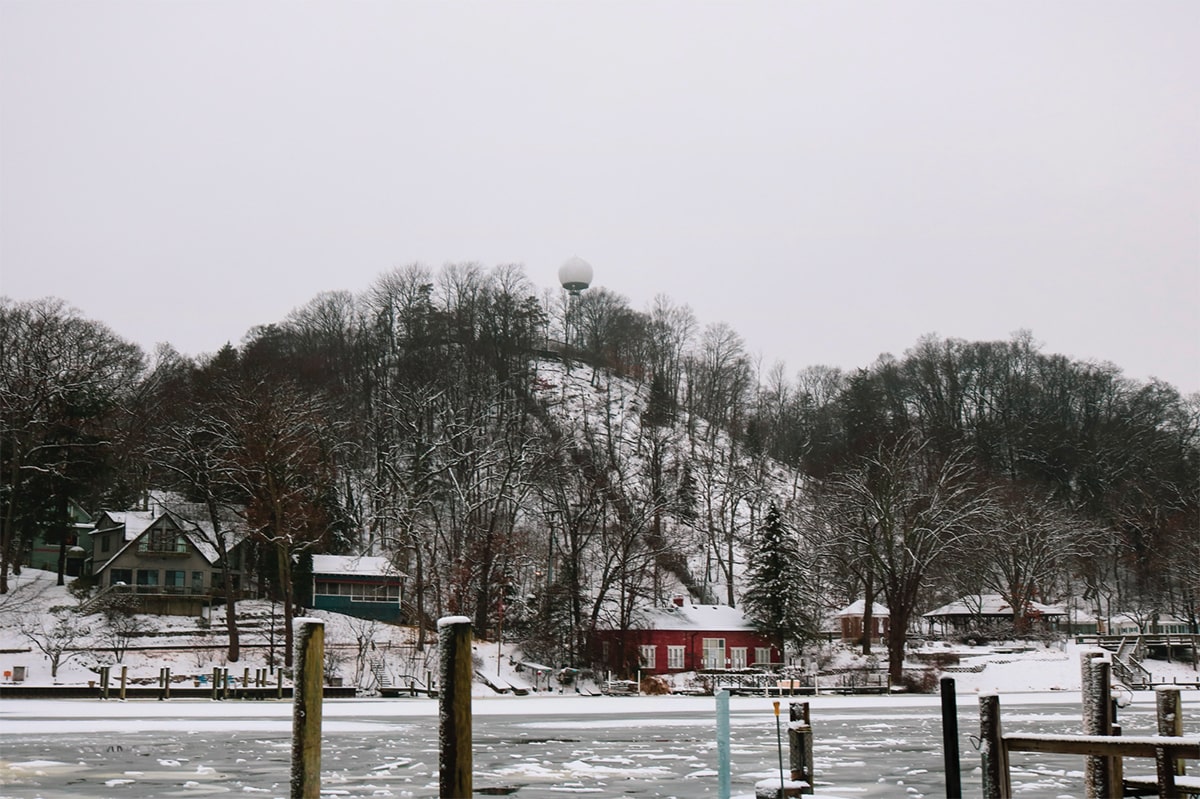 While you can see the Mount Baldhead radar tower from many parts of the beach, there’s nothing like climbing up to the top for a close-up view. The trail is open all year, but it’s even more of an adventure in summer with a little trip the locals call the Ball & Chain.

Start on the east side of the river in downtown Saugatuck and pay a dollar to board the Saugatuck Chain Ferry, the last working chain-driven ferry in the US. This hand-cranked boat crosses the Kalamazoo River on an underwater cable, providing a convenient shortcut to Mount Baldhead and other west-side attractions like the Saugatuck-Douglas History Museum and Oval Beach.

Climb to the Ball

Walk about .2 miles north from the ferry landing on Park Street, and look for the museum and the long wooden staircase to the peak. (Benches on the landings let you catch a breather if you need it. We won’t judge.) After climbing 300 steps to the top of Mount Baldhead, you’ll come face-to-face with the radar tower and peep over the trees to a enjoy a bird’s eye view of the harbor and town. If you’re up to it, follow the trail down the sand dune to cool off with a dip in the lake. Otherwise, take the stairs back down, wander through the museum, and have lunch after taking the ferry back across to downtown Saugatuck.

(Weather-permitting, the chain ferry runs all day from Memorial Day to Labor Day and costs $1/person each way.)