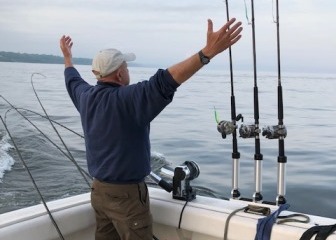 Take a stroll along the Black River in downtown South Haven and you’re likely to encounter the serious fishing boats. If you’re already a fisherman (or fisherwoman), you may know what fishing on the big lake is all about. But if you’re like me, lake fishing invites curiosity and a certain mystique. 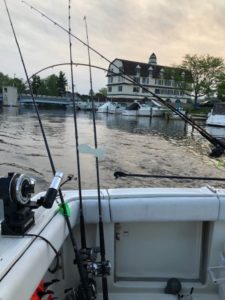 I’m not a complete fishing novice. I have experienced the occasional casting from a rowboat or canoe on camping trips, once tried fly fishing in Wyoming and had the distinct pleasure of salmon fishing in Alaska on a rare sunny day where, with a lot of help from a seasoned guide, I caught a 25 pound King Salmon.

Fishing on Lake Michigan, however, is a different experience and fishing with die-hard sports fishermen opens up a whole new world. Chuck Moore and his crew, experienced friends Bill and Kevin, graciously offered to take me out and glimpse their unique world. Moore’s boat is a 33-ft. craft called the Merry More, which he bought 4 years ago and retrofitted for optimum fishing.

We started out at 6:30 am and I was sure to take my Dramamine, though I wasn’t sure I needed it (I did). We headed out of the harbor into open water. It was a cloudy, close to foggy morning, but the lake was smooth. At about 3 miles out, the crew put trolling bags over the side to help with steering and to slow the boat while trolling. One by one, while Chuck steered the boat, Bill and Kevin put fishing lures onto the lines and cast them out, using boards to keep the lures away from the boat until 18 lines were out. 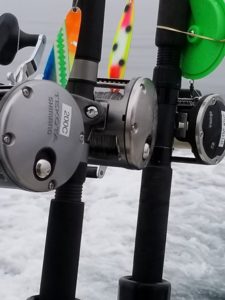 That was my first surprise of the day (that’s a lot of lines)–this is serious fishing. Chuck has radar in the cabin to track where the fish are lurking and steered the boat to optimize its position. The lures they used were called spoons (oblong pieces of metal with a treble hook at one end and a grommet or loop at the other.) The spoons were colorful and, it was explained to me, wobble in the water which attracts the predator fish. The lures have colorful names, too. One used was called Mixed Veggie, another, still in its package and never to be used, was named the O.J. Simpson.

Eventually we were 5 miles out in the lake. It occurred to me that we could have been on an ocean. We couldn’t see the shore and I once again marveled at this amazing body of water I have the privilege to live near which offers, what Chuck calls, “world class fishing”.

I confess, despite the Dramamine, I still became a bit queasy. I was told not to go below deck, to stand in the middle of the boat and look at the horizon. It helped. So did being called to land a fish. We hooked one and I was brought to the stern to bring it in. I began reeling it in and then a yellow devise called a rod butt cushion was placed on the butt of the fishing pole so that I could position it in my belly button and give myself some leverage without severely bruising myself. It took a bit of arm strength and I didn’t embarrass myself. The guys were good at giving instruction and I managed to bring the fish in so that they could net it and land it on board. It was a beautiful lake trout.

I let my husband, along for the fun, land the other three we brought in—two king salmon and a steelhead, all three larger than my lake trout. We headed back to the harbor, sooner I know than the guys would have liked. We watched them process the four large fish in about 15 minutes and we bid them farewell. They were headed back out. It was a good fishing day, and they weren’t about to let the day go to waste.

If you are looking for your own world class fishing experience on Lake Michigan, South Haven has a number of charter fishing companies who are eager to help. Here’s a resource to get you started on your fishing adventure: https://www.southhaven.org/experience/fishing-and-hunting

Nancy Backas has been writing, mostly about food, for more than 30 years. South Haven is a favorite place, and she and her husband Terry visit as often as they can. The rich food and art culture, along with opportunities to explore South Haven’s magical natural surroundings is what draws she and her husband to SoHa. She looks forward to sharing her South Haven discoveries. And, while they currently live in Chicago, with moving plans in the works, South Haven will soon be their new home.