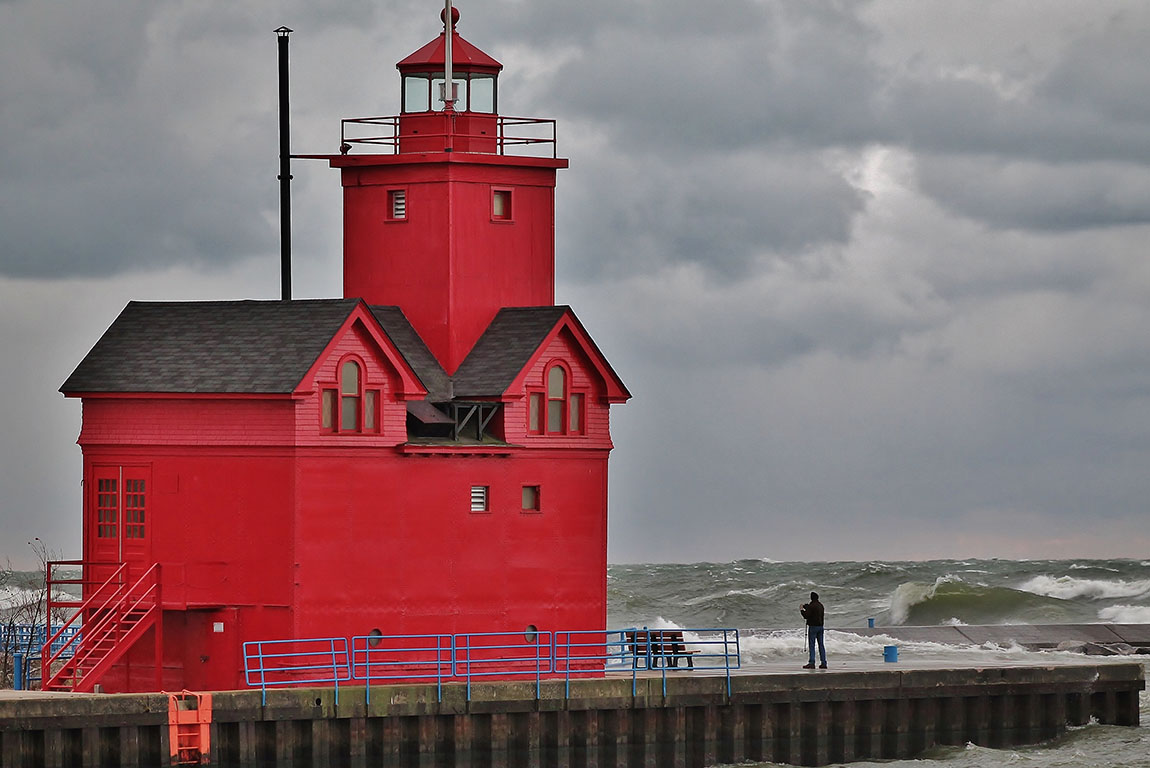 Holland’s beloved and popular “Big Red” lighthouse, which stands proudly at the south side of the Holland Channel, has a long and rich history dating back to the first structure built on that site in 1870. Currently the lighthouse is owned and maintained by a non-profit lighthouse commission and is Michigan’s most photographed lighthouse.

For the best view of Big Red, visit the Holland State Park where you can walk along the board walk to the north pier (wheelchair accessible). You can also view Big Red from Mt. Pisgah, where the dune stair case takes you 157 feet above sea level.

The Holland Harbor Lighthouse is an integral part of the history of Holland. A stormy history it is filled with disappointment countered by determination. Soon after the Dutch settlers came to the area in 1847, their leader, Dr. Albertus C. Van Raalte, wrote to the governor and the U.S. Congress requesting funds for the building of a harbor. Van Raalte knew from the beginning that if this new community were to flourish, access to Lake Michigan, to and from Black Lake, (now Lake Macatawa) was essential. However, the entrance to the lake from Lake Michigan was blocked with sandbars and silt.

Repeated requests for government help were made in the years that followed but to no avail. All the while, the Holland settlers made numerous attempts to establish a harbor. A permanent pier was built into Lake Michigan that was battered year after year by winter storms. Dredging was done both by hand and machine.

In 1866, harbor officials received word from Congress that they would receive an appropriation for work on the harbor.

In 1867, the Federal Government took over improvement of the harbor. Additional monies came in 1870, 1871 and 1872 but it was not until the turn of the century, fifty years after the effort was begun, that the harbor was substantially completed. It was too late for Holland to become an important commercial port, but not too late to help foster a thriving resort business. The Graham and Morton shipping lines made two trips daily from Chicago bringing eager vacationers to the lakeshore.

In 1893, a Life Saving Station opened on Lake Michigan. Ten years later it was replaced by a U.S. Coast Guard Station.

The first lighthouse was erected with $4,000 of federal funds in 1870, twenty years before the harbor was complete. It was a small, square, wooden structure that stood on an open platform on legs above the deck of the pier. On top was a lantern deck with a ten-window lantern room.

The lighthouse keeper had to carry his lighted oil lamp along a catwalk, which stretched from the shore where he lived to the lamp under a lens or magnifying device. When fog obscured the light, he signaled incoming boats by blowing an 18 inch fish horn often used on sailboats.

Both the pier and the wooden lighthouse had taken a beating from the weather over the years. So after the turn of the century, when the harbor was finally finished, a breakwater was built.

The steel tower was an obvious improvement from the wooden structure. Not only could it better withstand severe weather, it could be spotted by incoming vessels as far away as thirteen miles.

When fog lay on the lake, as it so often did, a light signal was useless. It was obvious that a fog signal, stronger than a fish horn, must be incorporated. In 1907, a steam operated fog signal was installed. Two coal fed Marine boilers produced steam to sound the locomotive whistle used as a fog signal. The 1907 building was built as a fog signal building only. It had no light (the light stood adjacent to it as a separate sructure unitil 1936 when the Coast Guard consolidated the two structures by putting a light tower on top of the fog signal).

To house the signal, the 12th Lighthouse District, which had federal jurisdiction over the lighthouse, designed and constructed a separate building, the basis of today’s lighthouse. This structure, unlike its two predecessors, was not placed on legs, thereby affording greater stability. The wood upper level is Queen Anne Victorian in style. The steeply sloped roof gables and Palladian window motif that are still still intact evidence this. The original roofing material was probably cedar shakes.

Originally, both the steel tower and the fog signal building were painted pale yellow with a deep maroon base. In 1956, however, the Coast Guard sandblasted the tower and painted it bright red to satisfy a requirement for the aids to navigation that a structure or light on the right side of any harbor entrance must be red.

This final phase of lighthouse development brings us to the structure as we know it today. In 1934 the light was electrified. In 1936, plans were made to abandon the steam driven fog signal, now nearly 30 years old, and install air powered horns using electricity as a power source for air compressors. Electrification also marked the end of the era of lighthouse keepers that had spanned 68 years.

The first lighthouse keeper was Melgert van Regenmorter, appointed to service in 1870 at an annual salary of $540. He served until April, 1908, just prior to the steam fog signal going into operation. It is said that he wanted no part of the new technology.

Between the years of 1908 and 1912, three different keepers shared time tending the light, Charles Bavry, George J. Cornell and Edward Mallette. Their relatively short terms of duty indicate that it took a special type of individual to withstand the constant pressure of maintaining the signal.

The last active lighthouse keeper was Joseph M. Boshka who came to Holland in 1912, after serving 15 years in the Lighthouse Service. Joseph Boshka, known as “Cap”, served until 1940. He retired to reside in Macatawa one year after the federal Lighthouse Bureau was abolished and the Coast Guard took over responsibility for aids to navigation.
In addition to tending the light and signal, the keeper and his assistants also stood watch. This was especially important during the use of the steam powered foghorn since it took about 45 minutes of firing up the furnace to build up enough pressure for operation. Watch was generally broken down into six-hour shifts. All work activities and times of operation were recorded in the watch log.

In 1934, when the lighthouse was wired for electricity, electric air compressors for the horn were installed. The light turned on automatically at the right time and the fog horn was activated by remote control leaving the lighthouse keeper basically without a job.

In 1971 the lighthouse was declared to be surplus since the Coast Guard could not justify the expense of repair and maintenance of this structure that no longer housed the electrically operated light and fog horn. Private citizens started a petition and letter writing campaign to save the lighthouse. In 1974 the Holland Harbor Lighthouse Historical Commission was formally organized to coordinate the effort, even crafting the name of “Big Red” to personify the lighthouse and generate awareness to save it.

Twice a year, the Coast Guard inspects the facility and maintains the light. A new $6,000 light that can be seen for 20 miles has been installed. The use of a fog signal had been discontinued. The original Fresnel lens is on display in the Holland Museum.

Over the years, “Big Red” has taken on a life of its own, popular with painters, photographers, beach-goers, and boaters. There’s nothing more relaxing than sitting in the shade of a tree, and watch the river empty into Lake Michigan, while the red sentinel stands guard on the opposite shore.