The ropes are untied and the boat embarks. You slowly steer through the Black River channel and into the blue sprawl of Lake Michigan, which reflects the diamond chips cast by the sun.

Once you’re on the lake, the strengthening air begins to cool: You pull on a sweatshirt. Crew members dressed as 1800s merchant seamen begin to move on the deck. One asks you to help him. 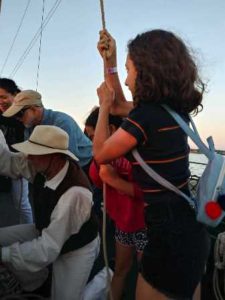 You join in raising a sail, which billows and cracks as you face the horizon. The wind whips your hair and the beaches of South Haven grow smaller behind you.

You cruise and float with your fellow passengers until the sky begins to dim and splash the coming night with celestial paint. You gaze out at the South Haven sunset, a blazing ball of copper that drops slowly like an eyelid at bedtime.

And somewhere, deeper within it all, you sense the spirit of an American era.

You’re at the pinnacle of South Haven sailing.

Built entirely of wood (mainly Douglas fir) in 2004, the boat on which you stand is an exact replica of Friends Good Will made specifically for the Michigan Maritime Museum in South Haven. If you lose yourself in the moment, you might even imagine what it was like to be on the deck of the vessel during her early 19th century voyages.

The original Friends Good Will was built in 1810 at River Rouge in Michigan by Oliver Williams, who owned a dry-goods store in Fort Detroit (now within Detroit city limits). 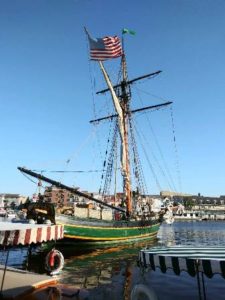 Williams sold everything from hammers to cut trees for houses to candles and barrels of whiskey. Before building Friends Good Will, the only way he could get the goods to his store was to buy them in Buffalo, New York, about 260 miles away on the far east side of Lake Erie. Once loaded on wagons, the goods would make a horse-drawn trek back to the fort, which could take from four to six weeks depending on the weather.

Determined to be more efficient, Williams built the ship so the goods could be acquired by traveling down the Detroit River and straight across Lake Erie. When sailing in good wind, the ship would trim the Buffalo trip from several weeks to two or three days.

In summer 1811, soon after Friends Good Will’s initial launch, Williams’ business was profitable. Just two round trips with the ship could stock his store for more than a year.

In fall 1811, Williams entered a contract with the U.S. government. Friends Good Will would transport soldiers, materials and military supplies including guns and gunpowder first up Lake Huron to Fort Mackinac (now part of Mackinac Island) and then down to Fort Dearborn in what is now Chicago. 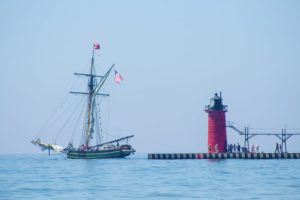 When Friends Good Will was making one such voyage to Fort Mackinac in summer 1812, Williams was not yet aware that the U.S. and Britain were at war. The British, who had taken Mackinac Island just days before, lured the ship into the harbor near the fort by flying false colors above the ramparts. They seized the boat and its cargo and crew and renamed it HMS Little Belt, an insult at that time. The British then armed the vessel and added it to the Royal Navy for battle against the U.S.

In September 1813, U.S. Commodore Oliver Perry recaptured the ship at the Battle of Lake Erie and kept the name Little Belt as a snub to the British. He also did not return the boat to Oliver Williams; rather, he put it into service for the American Great Lakes navy, which used it to ferry military cargo and ammunition.

In December, the ship was driven ashore by a storm just south of Buffalo. The crew unloaded it and went up to the city. Later that month, a British raiding party entered Buffalo and burned it down, including the boat. 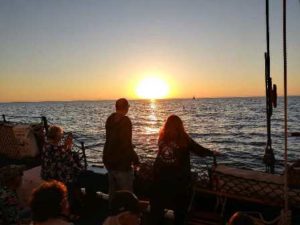 Thanks to South Haven’s Michigan Maritime Museum, Friends Good Will lives on through day sails, school field trips and educational tours. Schedule your ride today for an exhilarating Lake Michigan journey guided by the ghosts of history.

Discover more about the museum’s other inspiring boat rides as well!

A creative writer for many years, Jon Davis (eloquentarrow.com) paints pictures with his words and captivates readers with distinctive language. He now shares his love for South Haven with us, writing about the experiences you can have only in the Haven. Jon resides in Oswego, IL, with his wife, Kristie, and two daughters. They visit South Haven often to take in the scenic beauty and spend meaningful time as a family.